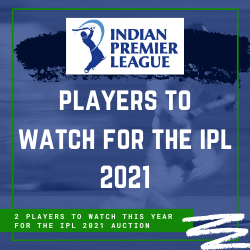 Although the 2020 IPL is yet to start we have identified a couple of players who are good prospects for their first IPL auction for the 2021 event. We are always watching T20 cricket and have our eye on up and coming players who could be the IPL stars of the future. After following his career so far we are excited to see Tom Banton in his first IPL this year.

Here are the two players we will be following this year with their debut expected in 2021. 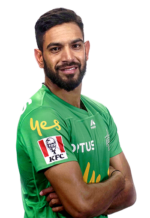 In this year’s big Big Bash Haris Rauf has shown what he is capable of with the ball. In the overall standing, he finished in 6th place for top tournament bowler. What is most impressive is that came from eight matches in which he took a total of 17 wickets. That gave him an average of just 2.1 overs per wicket which is the second-best record in the top ten, just slightly behind Daniel Sams who had taken 30 wickets.

Rauf set the tournament alight when he got a hat trick for the Melbourne Stars as part of a 5 for. His performances were so impressive they lead to a call up to the Pakistan team. He returned for the knock out games. When we look at his Big Bash stats we can see what a great tournament he had with the ball –

His economy was the second-best in the top 10 tournament bowlers. In economy, he was second to Adam Zampa who somehow went unsold at the auction for the 2020 event.

Here he is taking Josh Philippe C & B

His bowling action is well set for T20 cricket as he has excellent pace but a real variation of balls he can send down. This has made him tricky to play against and allowed him to keep taking wickets during the tournament.

His story is amazing, a player who’s 26 years old but only made his T20 debut in October 2018 for the Lahore Qalandars in the Abu Dhabi trophy. At school, he was more of a footballer than a cricketer and won the best player in the tournament for his school.

It was only due to the injury to Dale Steyn that meant Rauf played for the Melbourne Stars this season. I’m not sure even the most optimistic Stars would have expected him to perform so well in his first Big Bash!

He is definitely a player to follow this year and if he continues his current progression he could have a lot of interest by the IPL 2021 auction! 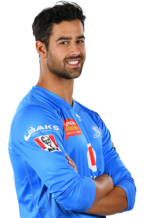 Australian bowler Wes Agar is the younger brother of Ashton Agar who has been on the scene for a while. At 22 he’s started to improve and this year’s Big Bash seemed to be a breakthrough year for him. Playing for the Adelaide strikers he plays beyond his years and became the go-to bowler for early wickets.

Whilst his numbers have not been as high as Rauf’s he has produced at times and at 22 he’s still developing in the game. As a side note, he also has a younger brother who is coming through the ranks in Australian cricket so keep an eye out for him in a couple of years!

Where Agar hasn’t been as effective is with his economy figures at 8.9 runs an over from his 41 overs. He has been bowling, in general, in the early parts of the matches and coming up against better batsman at his time.

Six and out! Glenn Maxwell whacked Wes Agar for six before exiting the next ball. #BBL09 pic.twitter.com/Jc4FiEYFOM

Wes has performed to a good standard in BBL 9 when you consider this is the first tournament he’s played in fully. He has been in the squad for the last three Big Bashes but has only played in a maximum of two matches each year.

This year we have seen Wes bowl at his older brother twice which always adds a bit of spice to the matches!

These are two players we are going to be tracking over the year and hopefully, we will see them at the IPL in 2021!