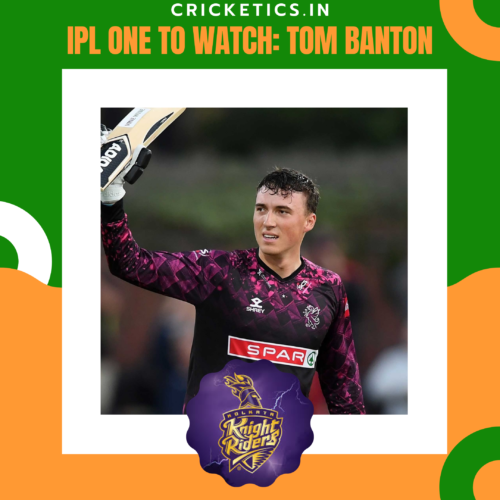 Tom Banton was picked up by the Kolkata Knight Riders for 1 Crore in this year’s auction and could prove to be an excellent buy. He has hit the headline in the past couple of days with KKR chief mentor saying he is a better version of Kevin Peterson – some high praise indeed.

With the bubble in the UAE and the England v Australia 1 day series coming up, it does appear that Banton may miss the first match or 2 while he has to quarantine. After that, he should join up with the team and be straight into the first team.

Banton shot to prominence in the 2019 Vitality Blast T20 series in England. He played 13 games and absolutely smashed it – 549 runs at a striker rate of 161. An average of 42 runs per innings in your first T20 season showed signs of how special a player Banton is.

For his next T20 tournament, Banton headed around the world to play in Austalia’s Big Bash League for the Brisbane Heat. Here at cricketics we watched the whole of this tournament and covered all the data for our Big Bash stats, watching the games is where Banton caught our eye.

At the Big Bash, he managed to build on his T20 strike rate at 176 despite only being available for 7 matches. He managed three half-centuries and one absolutely epic performance hitting 50 in just 16 balls. That included an astonishing 5 sixes in one over. That certainly set Banton into the cricket headlines around the world. Brisbane Heat has already secured his services for the next Big Bash coming up on December as long as permitted.

Here are his full stats for that tournament.

What can we expect to see from Banton in the 2020 IPL?

We are hoping to see Banton at the top of his game in the IPL. He comes to the tournament off the back of a number of games for the England team. They have been playing various games from their bubble with Austalia, Ireland and others. Banton has featured in some of the games including the T20s and the ODI’s.

This should mean that after his quarantine he will be fit and ready to go from his first day. Some other players for the IPL have had a few months off and returned to training in a bubble at the end of August in the UAE.

Banton looks to us to be a player to keep an eye on this tournament. Although he’s probably a little off the top batsman market yet. We will be looking at him in our betting tips for some value bets on top team batsman. We will also be looking at him in the “to hit a 6 in the match” markets. He has been good value in the betting for this at around 4/6 in the England v Australia T20s.

With Banton and Andre Rusell KKR have an outside chance of doing well in the IPL. They would need to be at the top of their game to actually win it!