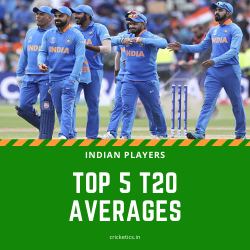 We all love T20 cricket, especially the IPL. It’s the most enthralling sporting spectacle and there is nothing more satisfying than watching a batsman smashing the ball to the boundary.

Due to the nature of T20 high scoring players are commonplace and the IPL has seen some incredibly placed shots, taking guile, skill and strength to achieve some outstanding performances.

With the Indian Premier League just around the corner, we’ve taken a look at the current highest T20 batting averages by Indian players.

Experienced batsman Shikar Dhawan has been smashing balls in T20 cricket for years. Dhawan who plays for Delhi Capitals in the Indian Premier League has amassed well over 7000 runs helping him to a very respectable T20 31.62 average.

India international Rohit Sharma plays for IPL side the Mumbai Indians and his ability with the bat is truly staggering. Sharma, who vice captains the national side, is considered one of India’s top performers in all formats of the game. His current T20 average is 32.08 having knocked over 8500 runs.

He’s become a star performer for India over the last few years in all formats of the game. He is a phenomenal all-round batsman. As the captain of the Mumbai Indians Sharma has won the IPL an incredible 4 times and the Indians are the favourite to do it again this year.

In early 2019 Sharma became the highest ever run-scorer for India in T20 cricket. With a few years at the top still to come, he should hold that record for a while.

India’s veteran batsman has been a mainstay of both international and T20 cricket for years. Dhoni, who is seeing out his career with the Chennai Superkings, has been hitting T20 balls into the stands at the dismay of many a bowler; entertaining fans from all across India and the world. His current T20 batting average is 39.88 with a run haul of over 6000 runs.

Ms Dhoni holds the current record for the longest run of T20 innings without a duck – currently stands at 84. For a wicket-keeper/ batsman this is an incredible record to hold and shows the quality of the player. In T20 cricket he also has the record for the most catches as a wicket-keeper and the most stumpings too.

At 38 you’d expect his career to be coming to a close, he will leave some T20 stats and records behind that will stand for a very long time.

And some other stats for MS Dhoni for wicket keeping

There’s much to be said about the Kings Xi Punjab captain KL Rahul. Whilst also undertaking wicket-keeping duties his ability with the bat in hand is quite remarkable. Rahul often plays with the experience of those much older than him and he’ll be targeting Kohli’s records. His current T20 average of 41.24 has been set after knocking less than 3800 runs.

Rahul is the youngest player on the list and has played just a third of the innings of some of the other top 5 players. He’s a play with an eye for a six who averages 1.61 sixes per T20 match. With a good few years ahead of him we would expect Rahul to break some batting records over the next few years.

He holds the record for the fastest 50 in IPL history getting is half-century up in just 14 balls!

India’s ever-impressive captain and one of, if not the, best batsman in the world, Virat Kohli is simply awe-inspiring. Kohli who currently bats for the Royal Challengers in the IPL puts others to shame with an average of 41.41 runs gained through an extraordinary almost 9000 runs.

Although he’s never won the IPL the RCB captain could change that this year. We’d certainly love to see Kohli lift the IPL trophy in 2020. At the age of 31, he still has time on his side and with his new found vegetarianism he’s clearly taking the time to look after himself to extend his career.

Kohli is the main man of Indian cricket and the main man of T20 cricket! We would love to see him win the IPL with RCB and then follow it up with the T20 World Cup for India in the summer.