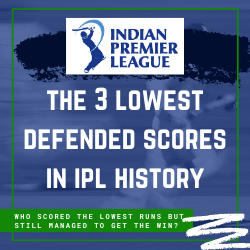 In IPL history there have only been four occasions where a team has scored less than 125 and still defended the chase to win the game. These are very rare occasions and we are last saw one back in 2011. All of the top 10 lowest run chases have happened before 2015 and we may not see one again in a while. The quality of cricket in the IPL seems to grow year on year and any team who fails to score over 125 deserve to lose!

We start with the lowest and then work our way from there.

What a match this was, one of the most unbelievable IPL games we have ever seen.

It was match number 54 in the 2009 IPL and at the start, it did not seem like anything spectacular was about to happen. CSK were going along nicely when the first wicket fell at 40 runs, at 4.5 overs. The first three batsmen put on 15, 32 & 20 respectively and CSK were in a reasonable position.

They then collapsed with no other players, except JDP Oram 17, putting on double figures. The wickets kept falling and the runs were not coming fast at all. CSK finished on 116/9 and looked out of the game with such a low score. However, they went on to become record breakers when they managed to defend this score! KXIP had some spectacular bowling figures from the first innings –

Despite not taking a wicket Breadon Lee’s 0/16 is an incredible 4 overs and included 14 dot balls – over 50% of the balls he bowled. 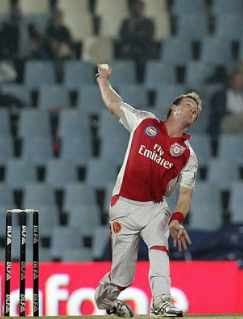 Then Kings XI Punjab came in to bat and it all started going wrong from the start. When you have a low total to chase the key, for us, is to build a nice steady score. 116 from 20 overs is not much of a chase, keep your wickets and build the score up and it will look easy – KXIP did not do this!

Of the ten players who batted only two managed to get into double figures, Pomersbach & Pathan. The whole team only manage one six and five boundaries. The bowlers for CSK were on top from taking regular wickets from the second over. The performance from Muralitharan was one of the best you will ever see in T20 cricket. From four overs he only conceded eight runs at an economy of TWO! He also took two wickets and managed a massive sixteen dot balls, Sensational!

He was well supported by Ashwin who had figures of 13/2 from his four overs.

The Kings XI stuttered to an abysmal 92/8 from their twenty overs cementing their place in history!

This is the joint second in the table with the Kings XI Punjab defending just 119 in 2009. This score was also defended by Sun Risers Hyrdabad in 2013, which we will come on to next.

The King XI opening innings was another case of constant wickets falling kept the score down. Like the above game, it was also a bowler on fire who help – Malinga. He finished the innings with 2/12 from his four overs. Both Malinga and Khan did not concede a boundary from their combined eight overs with is very impressive.

The Mumbai Indians had some real firepower in their side with Tendulkar, Dhawa and DJ Bravo among the names. 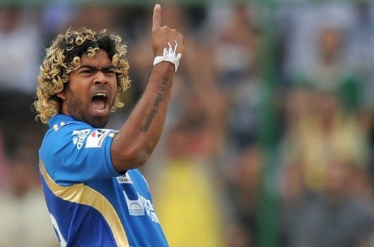 They started terribly with the opening three batsmen putting on just four runs between them – an abysmal performance. In this game it did look for a period like the Indians would go on to win with Duminy knocking 59 from 63 balls. Bravo and Nayar both stayed with him briefly getting 15 each. In their chase, they fell just four runs short with Duminy out with two balls remaining.

Sun Risers were first into bat and they looked in real trouble of breaking 100 at one point. At one point they were just 17/4 from 4.6 overs and they were absolutely on their knees. This could have ended up as the worst score in IPL history!

At this point in came Samantray who hit 37 from 37 balls and steady the innings somewhat. He was also supported by Mishra, 30, and Ashish Reddy 19* who helped to build a slightly better score than it was looking! A run rate of just 5.95 per overlooked an easy one for the Prune Warriors.

The Prune Warriors innings is one of the most memorable in IPL history, which we will come to shortly. They actually started the run chase reasonably well and 5/101 from 16.6 overs they still looked like they would get the remaining 16 runs for the win with no further problems – then the incredible happened! 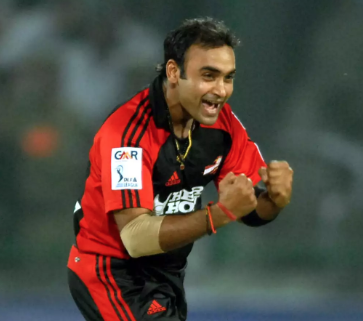 Four of the last five batsmen were out for a duck! The last three were all golden ducks as Amit Mishra took a hatrick to finish a truly incredible match. From 101/5 the Prune Warriors ended the match 108 all out.