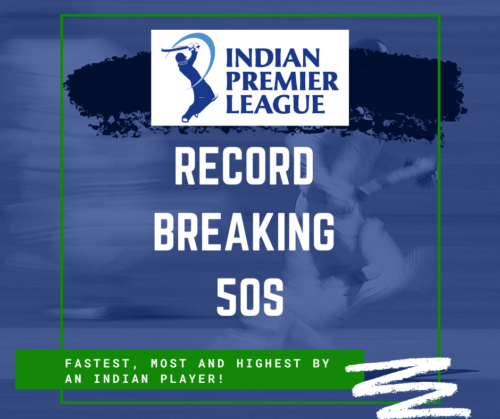 The IPL has lots of records for T20 half-centuries. Here will look over the latest records available.

The record has only been broken on three occasions after the first IPL tournament on 2009. It has been matched a few times at 17 balls and this seemed to be as high as it would go at first. Could we ever see a 13 ball IPL 50? We certainly hope so!

Did you know? David Warner was the first captain to hit a 50 in IPL 2015. He was named captain of the Sunrisers Hyderabad at the start of the 2015 series and wasted no time getting a half-century on the board in the first match of the tournament. He finished the tournament as the top batsman with the Orange Cap hitting 7 half-centuries from 14 innings. You can see the scorecard for the match here.

Most 50s in IPL history!

Who has the fastest 50 in  IPL history?

Who has the most 50s in IPL history?

Which Indian player has the most IPL 50s?

Suresh Raina has the most 50s from an Indian player. He is second overall with 38 50s from 193 innings.