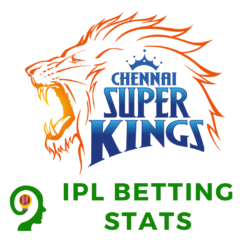 Chennai Super Kings are the 3 times winners of the IPL and have made the final 5 other times. They have the most final appearances of any team and were the runners up in the most recent 2019 IPL.

For the upcoming IPL2020, the Super Kings are joint second-favourites at 11/2 with Betway India. This represents good early value as with their stats you’d expect them to be close to the final.

When the tournament is live we will have live updated stats for the Super Kings right here!

The final position of CSK in the IPL, year by year – 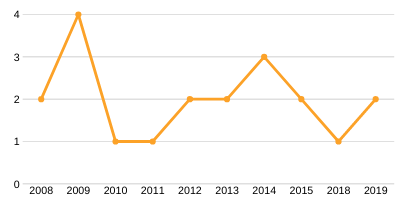 To start with we will look at the 2019 IPL and then back over the historical stats for the full IPL history.

The batting stats show what a great performance they put in at times with the bat. An average of 137 runs per game is excellent over the tournament. They also averaged 5 sizes per game and 12 boundaries.

In 2019 they failed to get a century score from any player with the highest score being 96 from 2 players.

This helps us when betting on cricket by looking at who the bigger hitters are and when they come to the crease.

Looking at these stats we would be looking to bet on a high run rate when a player like Jadeja is betting. He is further down the order so we should get more favourable odds on his performances at that time. This is when compared to someone like MS Dhoni where everyone expects him to be a big hitter.

The bowling stats are a little less favourable with more runs conceded overall than scored. The average score against the Super Kings was 142/6. They did manage 5 maiden overs across the tournament with is a respectable score.

These figures are great compared to others when you consider how well spread the wickets are. The Super Kings have 2 players in the top three wicket-takers for the tournament with Tahir and Chaher both making the top 10.

They are spilt by Kagiso Rabada who took 25 wickets but in 15 overs less giving him a better rate per wicket and a smaller average.

What a performance from Jadeja to keep to a 6.35 economy rate while playing 17 matches and bowling 54 overs. If we just look at players who bowled at least 10 overs then he was second in the standings behind Rashin Kahn who had a rate 0.07 better than Jadeja.

Deepak Chahar was the leading bowler for dot balls in the 2019 IPL season. He was over 20 clear of second-place Jasprit Bumrah, who finished on 169. Playing all 17 IPL matches helped get him to the top of the total dots.

Tahir looks a respectable 5th with 149 but over 17 matches that isn’t as high as it seems. When you compare these to, for example, the Royal Challengers Bangalore stats you ill see that Navdeep Saini had only 8 dot balls less yet played 5 matches less!