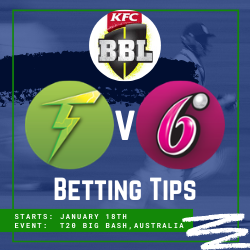 After the last match between these two, we cannot wait to watch this Sydney derby today. Last time between these two it was an absolute epic match that ended in a win for the Sixers in a super over. The Thunder will be looking for revenge for that result and this could be another epic battle in Sydney. The only thing that may change that is the high chance of rain in Sydney on Saturday evening. Hopefully, both teams will be able to get their 20 overs in!

Sydney Sixers are a very slight favourite in this match, due to their position in the league. We think this is a really close one to call and think the slight favourites for the Sixers is about right.

In the last match, the Thunder just couldn’t quite get enough runs from the super over to win, knocking 15 without losing a wicket. The Sixers managed 16 despite losing a wicket in the over. It was one of the biggest moments of the Big Bash League this year.

The Sixers have been in prolific form and are worthy of their second place in the table. Six wins from nine completed games are ain impressive start to the tournament. Last time out they lost to top of the table Melbourne Stars after they failed to chase down 217. (They have played since then but it was called off for rain) The main issue was the loss of wickets at key times meant the pressure was always on them. No players managed a half-century, with Clint Hinchcliffe doing the damage taking 3 wickets with the ball.

Prior to that, they had won five in a row and been excellent with the ball. The bowlers have been taking wickets with s a steady regularity and limited all bar the strikers to a maximum of 153 runs. They have been comfortable with the bat and have spread the runs around the top order. Phillipe hs been excellent with a couple of big knocks. They do not currently have any players in the top 10 batsmen for the tournament – latest ratings below – 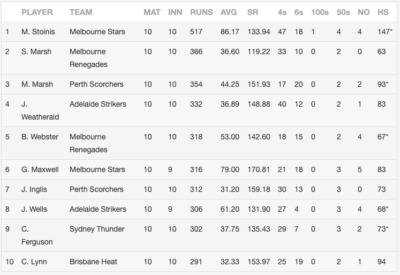 Sydney Thunder is a team I’ve followed closely this year and they have been interesting to watch. They are a team who seem unlucky at times to not have more wins. As mentioned they’ve lost a super over match and two to the D/L method including the Renegades last time out.

They’ve had one called off at 4.2 overs when they were looking in a great position against the Adelaide Strikers and if they’d got 4 more balls in they would have won on the D/L method. Against the high flying Melbourne Stars, they lost with just two balls remaining after an epic bowling performance. They looked down and out with the Stars at 130/2 but managed some quick wickets to leave the Stars to finish on 143/7. At one point it looked as though they may even get an unthinkable win.

They have the unfortunate crown of being the only team the Melbourne Renegades have won against. They’ve also lost to Brisbane Heat recently and won against the Hobart Hurricanes. Their form has been very up and down!

Some good odds on offer here. We like the look of Philippe at 12/1, he’s won a couple of these so far and is very dangerous with the bat when he gets in his stride. Khawaja is always popular as he’s a steady hand at the top order and capable of putting on a match-winning score without being explosive with it.

These are the odds we like!! There’s some amazing value to be had here, we will be picking a couple of these in our betting tips.

Three tips for us on the Sydney derby today, we’ve seen some excellent odds around!

The Sixers have been in good form but the desire for revenge will fuel the Thunder in this derby. They felt aggrieved to lose the last derby in a super over. As mentioned their form has been very up and down but we are expecting them to be up here. They have performed well with the ball in general and with some wickets, they should go well against the Sixers.

The steady presence of Khawaja is just what you need in a big derby game. He should steady the top order and hopefully help them build or chase a big score.

This is a bet specific to Betway (visit here) and each player needs to get over 25 runs for this bet to win. The odds of 11/2 were enough to catch our eye* 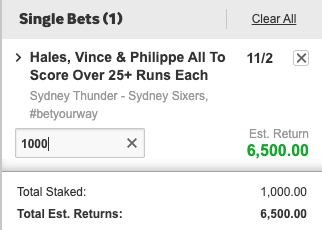 *Please only bet hat you can afford to lose. 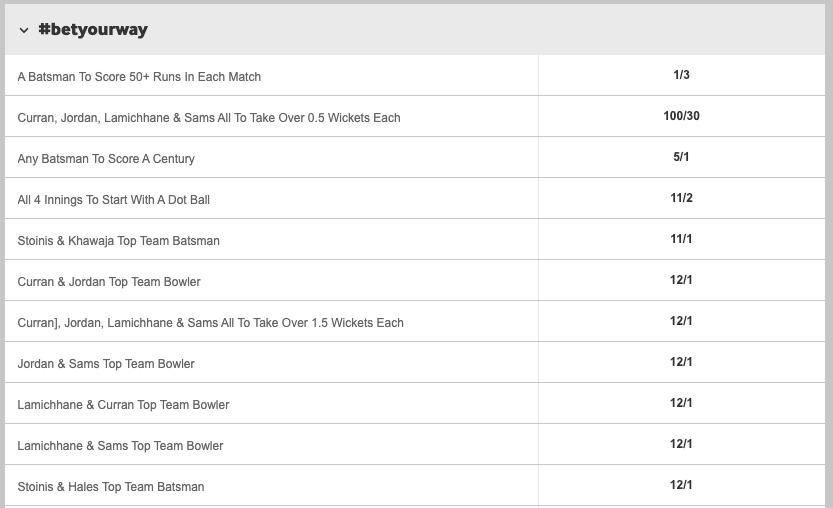 Like a bet you see? head over to Betway via the link above the image to claim your new customer bonus and get your bets on.