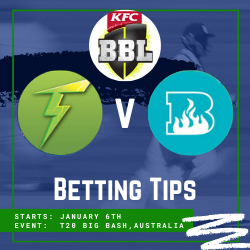 Sundays Big Bash game sees third-placed Sydney Thunder take on fifth-placed Brisbane Heat. They have both completed 5 matches so far and the Thunder have won 3 and the Heat have won 2. Where it is interesting between the two is the et run rate. Sydney Thunder has a +0.331 rate where Brisbane Heat is at a poor -0.120. This is why the Thunder are the favourites will all bookmakers for this match.

Our preview will cover the latest odds, stats, form and betting tips. If you want to get straight to the tips then click here.

The odds on Brisbane heat do vary depending on the bookmaker. At the time of checking Sydney Thunder were best priced at 8/11. Brisbane Heat is available in a couple of places at odds of 21/20 which is slightly better than 1/1.

We think that Sydney Thunder is a worthy favourite as their form does not reflect in their league position. They have had one game called off just before the D\L method would have given them the win. They have lost a game against the Sixers in a super over. With a little more luck they could have had 5 wins from 6 instead of the 3 they have.

At 8/11 we think they represent a good value bet for this. We’ve watched Brisbane Heat a few times and they’ve really failed to impress us across the tournament with their indifferent form. They do vastly better when they bat first, they are not a team of chasers.

The two times they have batted first they have hit over 200 runs and gone on to win the match. When chasing they have failed to get over 150 runs in any match. It may be worth having a bet on Brisbane Heat if they bat first. We would advise waiting for the toss before placing a bet on this market looking at the recent form.

A great market to find some winning bets from.

Clearly, with the form of Chis Lynn, there is no value in backing him at 1/2. We have previously had good success in backing a few of these players and have a couple of picks in our Thunder v Heat betting tips.

This is a market that has caught our eye as the tournament has gone on. We’ve seen the top bowler for the match market is difficult to call but this offers more hope to us. If we can identify which team should lose wickets then we can look for the bowlers who are set to take them.

Here are the odds –

We’d need to see the team before backing any of these just to make sure that they play!

This match looks to have some great value bets for us. Here are our top 3 cricket betting tips for this match.

As mentioned above Brisbane heat have only won when batting first and have got an impressive 200+ runs on both occasions. This makes them worth backing if they bat first and worth betting against if they bat second!

This is a great value bet for a player who constantly hits sixes but doesn’t hit loads. He’s a more conservative player than someone like Chris Lynn but has a good run of sixes in his recent innings. He is likely to just hit one six in his innings but the odds are again excellent. We had a very similar bet in the last match which also won. 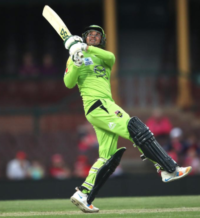 In the last 5 matches, these two have split the top team bowler each time. Sams has won it on three occasions and Morris on two. Putting level stakes on both allows us to get a profit if either of them wins it – which the form shows they probably will!

In the event of them, both taking the same number of wickets this market will be settled on the bowler with the lowest run rate.