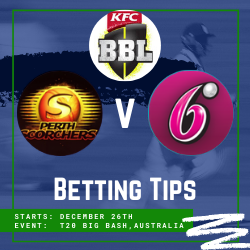 Perth Scorches v Sydney Sixers is the first game of the Big Bash where we see a replay of an earlier match in this year’s tournament. In the first match, the Sixers demolished the Scorchers, bowling them all out for 131 runs. The Sixers then chased that total down in just 15 overs losing just two wickets. Josh Philippe stars in the chase hitting 81 from 44 balls including 3 sixes.

We called the Sixers to win in our tips last time round and for this game, we will have 3 tips and the latest betting odds. Want to skip the odds and get straight to the tips? Click here for our Scorchers v Sixers big bash tips.

Here are some selected odds taken from 10Cric* –

To win the match odds

Since the opening match win the Sixers have lost their other two games and have failed to maintain their form from then. The Scorchers have played two further games winning one and losing a rain-affected game against the Adelaide Strikers. If we are looking the Big Bash 9 stats so far neither of these teams have any particular trends we can follow.

In the other two games, they played the scorchers hit over 180 both times, knocking 196/7 in their win and 183/7 in their defeat – that was chasing 198 in 18 overs due to the rain. You could argue that they have been in good form with the bat and were unlucky in the game against the Strikers coming up against Jake Weatherald in fine form who smash 83 from 47 balls. He was well supported by Alex Carey who hit 55 from 24 alongside him. It was a brutal and efficient performance with the bat from those two and included a 100 meter 6!

The Sixers, on the other hand, have been relatively poor in their defeats. They were bowled out for 104 against the Hurricanes and fell miserably short against Brisbane Heat losing by 48 runs in a poor run chase from them. The loss against the Hobarts was probably the worst as they were only chasing down 129 but the middle order put in very poor performance.

Total wickets in the match odds

The markets are still going towards unders due to the wickets lost by both teams so far this tournament.

Average wickets per match (3 matches each)

From a value perspective, the unders odds would probably be the one we’d lean towards but its not a tip from us on this game.

These are some good odds and some tempting pricing.

*Odds correct at time of writing and subject to change/withdrawal at any time.

We’re having 3 tips no this game covering different bookmakers and options.

We’re taking this one with Betway!

This is a great bet for a player who’s averaged 0.9 sixes per innings in the Big Bash. This is a record that he looks set to prove on this year and we think he will be key to the team. For this tip to win James Vince just needs to hit 1 ball for six over the boundary. If he does hit more then great, but it does not matter for this bet! He has hit 3 sixes so far this tournament and at odds of 5/4, this is a great bet and is also available in India with 22bet.

Okay, this one is seriously odds on but still worth the bet! In the last game for the Scorchers Livingstone hit an incredible 69 off 26 balls including an astonishing 7 sixes! It was his first performance for the Scorchers in the Big Bash and with those numbers, we are expecting him to be in fine form again in this match.

Philippe has been in good nick with the bat so far this BBL. He’s slightly odds on here but we are happy to take the 5/6 odds.

The stats for this game make interesting reading. In last seasons Big Bash the Scorchers comfortably beat the Sixers. This does not show the full picture though and a look at the stats in more depth we get some interesting trends.

You have to go back 4 matches to the 16/17 season for the last time the Sixers won this fixture. That includes losing to the Scorchers in the 17-18 big bash final. Here are the highlights if you missed it, what a match!

The opening match record of both teams is also interesting with the Scorchers losing last year but winning at the start of the previous three years matches. The Sixers faired better with an opening match win last year.

It’s easy to see why the bookmakers have this game tightly balanced. The head to head form points to the Scorchers. The injury problems mean that for us the Sixers offer much more value in our bets.