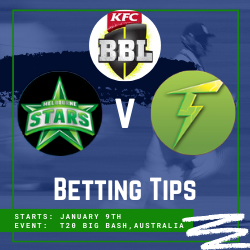 Top of the table Melbourne Stars takes on Sydney Thunder in the second of Wednesday’s doubleheaders. The Stars are joint top on 10 points with Sydney Sixers who have played a game more. They have only lost once so far this tournament to the Adelaide Strikers. Sydney Thunder has three wins from six completed games so far and has been up and down to watch.  More recently they have one win in their last four matches including one tie which they lost in a super over.

It is no surprise to see the Stars as a very strong favourite for this match. They are the team to beat in this year’s Big Bash so far.

The odds on the Melbourne Stars are so short it’s not something we would consider backing. They are a strong favourite but the bookmakers seem to be protecting themselves with very short odds. On the flip side of that Sydney Thunder are not very far out at odds of 5/4 based on how short the stars are. We will be picking a match-winner in today’s cricket betting tips which you can find further down the page!

Whilst the Sydney Thunder aren’t getting the same results as the Stars they are not playing too badly. They’ve had some good knocks, lost a super over and lost on the D\L method twice. These are all things that have gone against them.

They have some quality in bat with Alex Hales, Usman Khawaja and Callum Ferguson. In our opinion, this is one of the best opening 3 in the tournament. For them to have a chance in this game they just need one or two these to get a decent score. When they beat the Strikers we saw Khawaja hit 64 from 50 and Ferguson hit 73 from 46. Khawaja is the less explosive of the three but has performed very well this tournament with is considered to approach.
Back to Page menu.

As always we will be having a bet on this market.

Glenn Maxwell holds no major value to anyone at 4/7 odds. There are a few players at goods odds including Hales, Stoinis and Ferguson. We do have a pick from this market in our tips, we consider the Stats from the Big Bash so far to pick our bets and this player has some great stats compared to their odds.
Back to Page menu.

A different market for the odds today – to score 50 runs. We have seen a good number of 50s so far and this game looks good for another one with the quality of batsmen on display.

This is an interesting market when compared to the to hit a six odds. It’s clear that some players are more likely to hit a six than have a good inning. Both Stoinis and Khawaja are both in fine nick with the bat and it is no surprise that they lead the betting here.
Back to Page menu.

We’ve looked over the stats and picked our 3 best tips for the second game of today’s Big bash League matches.

As mentioned in our preview, the Stars are in great form currently. Sometimes when we pick a bet we look at the form and take a view of the value on offer – this is one of those cases. The Thunder has performed reasonably well so far and has an excellent top order. They are capable of beating the Stars in this match. We’d be looking for the two of the top four batsmen to get a score and then this game will get interesting.

We’re not sure who has priced this one up as Khawaja has been hitting sixes in most games. We’ve backed him in the last two matches and he hasn’t let us down. At Cricketics we’ve nicknamed him “Khawaja one six” due to his tendency to hit one six per innings.

His stats for the tournament read 7 innings and 4 sixes, but he’s hit a six in 4 innings so far, including his last 3. This is good form for us and with odds at 6/4 is a great value. His odds reflect the fact he’s not an explosive hitter but will happily play his own game and keep the runs going on the board. He’s more a play that will look to pick a poor ball for a six rather than someone like Hales who will look for big hits at every opportunity.

This is a fantastic bet for this match. We are covering both players and hoping to either one of them be the top bowler in order for our bet to win – place the same stake on both players for this to work. Sams has been one of the standout bowlers of the tournament and has been the top team bowler on four occasions so far.

If you just wanted to back one player for this match we would suggest Sams.

Morris is another bowler in good form and taking wickets – which is key in this market!