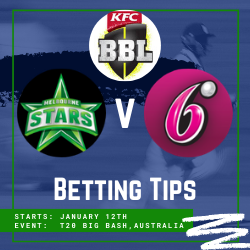 Sunday sees another doubleheader and the second game should be an absolute cracker! It sees the top two teams in the league play with the no 1 team the Melbourne Stars take on the Sydney Sixers. The Stars come into the game off the back of Fridays win against the Renegades. The Sixers come into it after a 4-day break after beating the Adeliade strikers.

It looks, on paper, to be a epic match of high runs and hopefully lots of sixes.

The Melbourne Stars go into this game as the bookies’ favourites, it’s at their home ground where they excel and they are the top team in the league so that makes sense. For us, their price is a little short and we would have expected the betting to be a little closer than it is.

Whilst they have been winning regularly, they have dipped in their last two performances. We have watched both games and they seem a little off the form they were showing earlier in the tournament. Two games ago they beat the Sydney Thunder with a couple of overs to spare, but they lost early wickets. At one point it looked like they could be in a little trouble and they were only chasing 145.

Last time out against the Renegades they lost early wickets, with the key man and opener Marcus Stoinis going for a duck. Dunk and Larkin both failed to make a decent score, struggling to get into double figures. It was left to captain Glen Maxwell to steady the ship and bring home the win.

The Sixers, on the other hand, have been building their form in this tournament. They started a little slower than expected but have powered in since winning the super over against Sydney Thunder.

They have been excellent with the ball taking at least six wickets in their last five games. They take an average of 8 wickets a match on their recent form. This is limited to the teams they have played against an average of around 155. They have then, when required, chased these scores down comfortably on most occasions. The Sixers are not to be underestimated in this game.

We’re looking at the odds for the top team batsman – not the top one in the match as we find this a better market to pick from.

Until his duck in the last match, Stoinis has been playing well in this year’s Big Bash hence his status as the favorite in this market. In the Stars last two matches it has been the captain Glenn Maxwell who has been the top batsman both times. In both cases, he has come in after wickets have fallen and played a captain’s innings. Against the Renegades his performance won the match for them and included an impressive seven sixes.

We do, however, think his odds are too low to back here as if the top order do well for the Stars he may not face any balls.

The top team batsman market is one of over 100 markets on offer for this match.

There are some good possibilities here with odds starting at 3/1.

This is an interesting market for us to look at – which openers will score the most runs before the first wicket.

This is a great market and the prospect of a draw at those odds would be amazing, although highly unlikely! Both teams have excellent openers and it is no surprise to see such tight odds in this market. I’m not sure we will be having a tip on this market as the stats do not point us in any particular direction or trend.

As you can tell from our preview we cannot see anything other than a Melbourne Stars victory so we have been looking for some more value for a couple of our tips.

As mentioned in the preview above, we feel the Sixers are in stronger form than the Stars. With odds of 11/8, we are happy to bet them as we feel this offers us good value. The Stars even made hard work of dispatching the winless Renegades in the last game.

Having watched all the recent games there seems to be a composure around the Sixers where they don’t get panicked in situations. The Stars more recently have looked more nervous with the bat when they lose wickets. This will be a tight game but we’ve selected this for the value it represents.
Tip 2 – 1xBet – Most sixes in the match Melbourne Stars 8/11

Despite the mentioned drop in levels, the Melbourne Stars have still been hitting it over the rope with a certain momentum. Glen Maxwell has been particularly prolific in the last two matches.