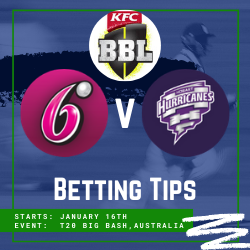 Wednesday was a great day for Big Bash action with the Renegades getting their first win and the Melbourne Stars strolling to yet another victory after a poor batting performance from the Scorchers.

Second-placed Sydney Sixers are strong favourites over the hit and miss Hobart Hurricanes. Here are the latest odds

The Sydney Sixers have clocked up six wins from their nine and have played well at times. They have a 0.003 net run rate currently which could be better, especially when compared to 1.2 from the Melbourne Stars who are above them in the league. The Hobart Hurricanes have three wins from their nine matches so far and a -0.89 net run rate. They have been very on and off this tournament and have just not managed to put a run together at any point.

The Sixers were on a run of five straight wins before they stepped up to face the Melbourne Stars last time out. They fell to the Stars but there is no shame there! This match included Marcus Stoinis record-breaking innings and the Stars just could not take any wickets. They managed the first wicket after 19 overs and by then it was all too late. They were set 220 to win and managed to get to 175/7 with a steady flow of wickets preventing them from getting close to matching the Stars.

As we’ve mentioned the Stars have beaten everyone and have nine wins from ten, prior to that the Sixers were in excellent form and that should continue against the Hurricanes on their home pitch.

The Hurricanes have won a meagre one from their last six games and got thumped last time out. They were all out for 98 chasing a total of 175 against the Perth Scorchers. This was a very poor performance with bat and a ball and there’s not much positivity around the Hurricanes at the moment.

They’ve failed to hit any major scores and have a low innings average. They’ve also not taken enough wickets.

Some great odds here and you can cover a few players and still make a profit. A couple of players have caught our eye fro a punt here – Philippe, Curran and James Vince. All capable players and good odds for top performance.

Team with the most sixes odds*

This is market were only sixes count!

A great market and one we have a tip for below. If you want to check out our other tips see our cricket betting tips blog here.

Lower odds that we would usually go for but the stats and form point to a Sixers win. The Hurricanes are in a really bad run, combine that with home advantage for the Sixers and this starts to look like a one-sided affair.

We are not waiting for the bat flip for this one and are happy to take the Sixers regardless of if they bat first or second.

We’ve seen a good number of ducks for the Hurricanes and the way they are playing currently this looks good value. To win the bet we would also have to see a run out in the match. At odds of 6/4, this looks an excellent value bet from Betway. You can only bet on this one with Betway India as it is one of their unique markets.