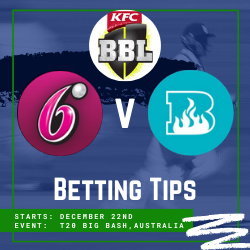 Sunday sees two games again and we have selected the second game to preview as we think it has more value in the betting. The Sixers have one win from town and the Heat have lost both of their opening games. The Heat have failed to get past 150 runs in the chase in both games. They’ve lost 18 wickets in both chases too and look vulnerable if they are batting second.

For this match, we will cover the latest betting odds on selected markets and 3 betting tips. If you want to get straight to the betting tips – click here for our Sixers v Heat tips.

I was surprised to see Brisbane Heat at odds on. They’ve looked poor to me in the two games and are yet to get going in the tournament. Personally, we would have had both teams around the same odds for this game. The Sixers absolutely destroyed the Heat last season getting them all out for just 74. They then chased the score down losing just one wicket.

Total wickets in the match odds*

With Brisbane heat losing 18 wickets win two matches so far it is no surprise to see the overs score at odds on. The Sixers are in good form with the ball taking 19 wickets in their two games. Although the odds are low at 3/4 the over 11.5 match wickets would be our bet of choice in this market. With betting on the short form of the game we think checking out Twenty 20 stats really helps when selecting your bets. This is a prime example of that.

Apart from the top two there 6 players all over evens in this market and that sounds like a dream to us! The players at odds on hold no great value despite having lower odds. We have seen a couple of players who catch our eye and these will be appearing in our tips below.

*Odds correct at time of writing and taken from 1Xbet India.

Today we have 2 tips for today’s game inducing some excellent value in our favourite “to hit a six” market. We’ve now had 6 tips in this market and won 5 of them including the last two in the first over of the innings – just how we like it!

As mentioned above Brisbane Heat are yet to win a match and have been poor with both bat in ball in their earlier games. It was a real surprise to see the Heat as the favourites. They were expected to do better by the bookmakers but we are happy to take the Sixers for the win at even money (1/1 odds, 2.0 decimal).

If you are backing the Sixers for the win make sure the odds are at least even money or higher if you can find them!

This bet is 2 single bets on the individual player to hit a six. If we use the same stake on each player we will see a profit if just one of them does and even more profit if they both do! This is the kind of smart betting that we like, especially when we consider the stats and form of the two players.

These are fantastic odds for a player doing well with the bat so far. He hit an unbeaten 81 from just 44 balls in the first match, a knock which included 3 sixes and 11 fours. In the losing game, he hit 24 off 22 including one six and one four. For us, he’s in good nick with the bat and odds of 6/4 are far too good to turn down.

In the last match, Philippe put one on the stadium roof as you can see below!

Josh Philippe ends this one in STYLE. The @SixersBBL win ???? #BBL09 pic.twitter.com/RL1EAOu7Jb

In the first match, Vince wasn’t quite at his best getting just 13 from 16 balls and only one boundary. There is an important factor in this though – the Sixers were on track for the win and a more steady innings was needed rather than an explosive one. Vince delivered the mature innings they needed and let Philippe take care of the run rate from the other end.

In the second fixture, the team needed runs and that’s what Vince went for! He scored a quickfire 18 off 15 balls including two sixes.

As mentioned the Brisbane Heat bowling attack isn’t on good form and have conceded 4 sixes in their first match and 6 in the second match.