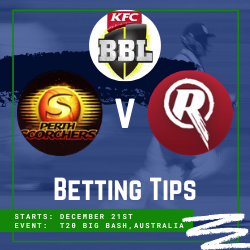 Saturday’s second game sees the Perth Scorchers take on the Renegades. This is the second game of BBL 9 for both teams and they both started with a loss in the first game. The Scorches were comfortable beaten by the Sixers in game 2 and the Renegades lost to Sydney Thunder who chased down 169 with 2 balls to spare.

Here we will preview this game with the latest odds and have 3 tips for the match. You can get straight to our Scorchers v Renegades betting tips here.

As we were expecting the Renegades are a slight favourite for this match. Whilst they lost the first game it was very close on and they put in a very decent performance. Their main problem in the match was the opening partnership from the Thunder where they knocked up 99 before the first wicket. After that, the Renegades pegged them back with regular wickets but the damage was already done.

The Scorchers, on the other hand, was poor and the Sixers were clinical in finishing them off. They chased down the 131 in 15 overs losing just 2 wickets. Batting wise only Cameron Green really emerged with any credit locking 36 from 32 balls to be the top batsman on the team. Bowling wise Chris Jordan was the most impressive with 2 wickets from 3 overs at an economy of just 4.33 but that was nowhere near enough.

Total wickets in the match odds*

This is the shortest odds we’ve seen so far in the Big Bash League for over 11.5 wickets in the match. This is driven by the Scorchers being all out in their last match. The odds are too low to take in our option on this match today. We would expect the game to go over but the returns are a little low to offer us any value today.

This has been the best alternative market for us this tournament! We’ve had 5 predictions and been correct with 4 of them hitting a six. It is a real value market and without a doubt our favourite. Odds today are taken from 10 Cric India.

Scroll down to our tips to see who we have selected from this list in today’s tips.

*Odds correct at time of writing from various India bookmakers.

3 tips for the second game of the day.

As mentioned above the Renegades are strong favourites in this game and we think that is merited. These odds are shorter than we would usually take. I think this is lined up for a solid Renegades win.

So far this year we’ve predicted the outcome of 5 matches getting 4 of them correct so far.

Opener Sam Harper looked in great nick with the bat in the opening game. He hit 39 off just 19 balls including 2 sixes. Mix that with the poor performance from the Scorchers with the ball, especially at the start of the game and this looks some good value odds. 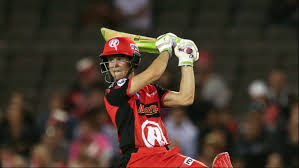 Shaun Marsh at 4/5 also caught our eye as a player capable of big hitting and is worth a side bet. Our main bet is for Sam Harper to hit one though.

If the bowlers are tied in wickets it will then go on the economy rate where Jordan should excel.