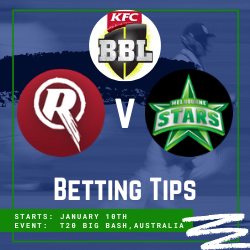 Whilst this is a derby match we cannot see the Renegades getting anywhere near the Stars in this match. It’s not a matter of if the Stars will win, just a case of how!

The Renegades have been the worst team in the Big Bash by a long way! In seven games they have lost seven and have a net run rate of -0.474  which is, unsurprisingly the worst in the league.

These are both the shortest odds, 8/15 and the longest odds 7/5 that we have seen in the Big Bash so far. This represents the gulf in class between these two teams. We’d suggest that the odds on the Stars are still not short enough. It would be some sort of a minor miracle for the Renegades to get their first win of the tournament in this match.

There top player, Arron Finch, has been doing his best to help them out and has been playing well with the bat despite having little support. He’s now left to captain the Australian ODI team on a tour of India.

In the earlier game between these two, the Renegades batted first and posted 142/9. The Stars won with 7 balls to spare although it was a very comfortable batting performance from them as they took it nice and steady to mot put any pressure on themselves.

The Melbourne Stars have been in scintillating form winning six and losing one. They look worthy favourites in their win on Wednesday and never looked flustered chasing 145, winning with 13 balls to go.

That game saw bowler Haris Rauf take an incredible hat trick finishing with figures of 3/24 from his four overs. He looked in great form with the ball and if he bowls like that against the Renegades then he could two or three more wickets to his name.

With the bat, Marcus Stoinis continues to impress. He lost the top batsman golden cap briefly during the game against Sydney Thunder but then helped himself to another 50 runs to get back to the top of the most runs table. Captian Glen Maxwell is also playing well and hit 59 not out off 37 balls in that game to seal the victory.

Back to Page menu.
To hit a six odds*

Mixed odds for this game with some value to be had in the higher-priced players.

It’s no surprise to see Maxwell and Stoinis at short odds here, they are the two form batsmen in this match. The only thing that would concern us is that if the Renegades bat first they may not have a massive total to chase! They will be much more tempting if the Melbourne Stars bat first.

Again there are some big hitters in this market!

As you can tell from our preview we cannot see anything other than a Melbourne Stars victory so we have been looking for some more value for a couple of our tips.

This is the lowest priced tip we have had all tournament. We would usually avoid odds so low but this looks an easy derby win for the Melbourne Stars. While the odds are low we are really struggling to see how the Renegades can win here, even if the Stars take their foot off the gas – which we are not expecting to see!

The Renegades are in dire form and have been losing early wickets in this tournament. We like the value on offer here for them to have a slow start. They are missing Aaron Finch who has hit a couple of half-centuries at the top of the order too.

Today we will only have two tips on this match as there is a lack of value around. If you are looking for other betting tips check out our India v Sri Lanka T20 tips here for today’s game.