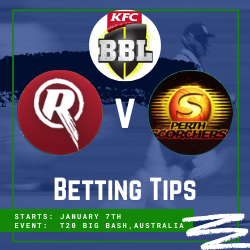 Tuesdays Big Bash game is a bottom of the table clash between the Perth Scorchers and the winless Melbourne Renegades. Whilst the Scorchers have won just two from six so far they do have a worse net run rate than the Renegades. The Renegades have not been too bad with the bat knocking 150+ on five occasions and top-scored at 185. It’s with the ball that they have struggled, mainly with taking wickets. They have failed to take more than four wickets on four occasions, of the times they have gone over one of them was against the Scorchers.

Our full preview will cover the latest betting odds, stats and form and our tips – You can get straight to our Renegades v Scorchers tips here.

The Renegades have come out as a slight favourite despite not winning a match so far. This is down to their home advantage and how close they came to beating the Scorchers earlier in the Big Bash.

Let us be honest, the Renegades have been very poor so far. To make them slight favourites for this match is laughable based on their recent performances! Although their games have been tight, losing by a few runs or with just a few balls to spare they have still lost 6 games in a row. This builds a lack of confidence in the players and wears them down over time. No one wants to be the worst team in the league!

The Perth Scorchers had a really good win over the Brisbane Heat to games ago. The Heat have dispatched Sydney Thunder on Monday in emphatic style so that is a really good result. The Scorchers knocked 149/6 which didn’t look huge. They then got Brisbane Heat all out for 109 in 18.4 with Fawad Ahmed the pick of the bowlers with 16/3 off his 4 overs. Kelly and Agar also chipped in with 2 wickets each with good economy figures as you would expect from a low score.

We had another winner on this market yesterday and will have another tip for today’s game (See our to hit a 6 tip here). It’s a great value market in the Big Bash and has served us well.

As you can see there are a few players at well over odds on. These are the classic big hitters where you would expect to see them hit a six if they were in for just a couple of overs.

Again we had a winner in this one yesterday with Sams taking the most wickets for Sydney Thunder. The team bowlers market has much more value on offer than the main top bowlers as it offers less variation. The Scorchers can still lose but there will still be a top bowler for them.

There’s a wider range of bowlers on offer for the Renegades as we are unsure who will start yet. We would advise waiting for confirmed teams before placing your bets.

After 3 winning tips yesterday we are back looking for some more winners today and have identified 3 value bets for this game.

I cannot avoid the odds on the Scorchers to win here.  They’re playing a team with 6 defeats in a row and are at almost evens, this strikes me as a value that is too good to ignore. I am not saying they aren’t capable of winning this match just that the recent stats from the Big Bash point to another defeat for the Renegades.

The best odds for this bet are with 10 Cric, who accept customers from across India.

Whilst it’s still odds on I think Mitchell Marsh offers the most value of many players in the market. He’s currently averaging 38.6 with the bat and has knocked 193 runs in 6 matches so far – fine form. Where he stands out in the betting is his 10 sixes in those 6 matches. That’s one more than Liam Livingston who is as low as 8/15 in this market.

Another player we considered was Josh Inglis who is at evens (1/1) and has 5 sixes in 6 matches so far. His average is lower at 20/50 as he bats further down the order. He’s faced 84 balls so far and has hit 13 fours and 5 sixes at a strike rate of 146. He could be worth a side bet as well.

These are the two top wicket-taking bowlers in the team, both have 8 wickets in 6 matches.