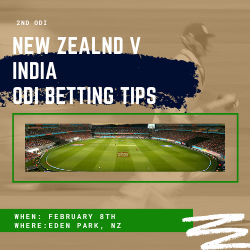 After the thrilling T20 series India now takes on New Zealand in a three-match one-day series. It will come as no surprise that India is the favourites for the series as well as the first match. We preview the series and will offer match by match betting tips for the 3 games (You’ll find them all on this page with will be updated during the series.

After the first game, India’s odds have drifted slightly and New Zealand is slightly shorter, as you would expect. India still remains the strong favourites for the match, however.

This is still a very short price for India and we will not be backing them for the win here at those odds. The odds on New Zealand could possibly be a little longer than they are currently before we get interested. If you are into trading cricket on exchange markets we can see a good betting strategy to lay India if New Zealand bat first and look to trade out early in the game.

The first match of this three-match series saw both teams play well with New Zealand eventually coming out on top. India posted an excellent score of 347/4 from our 50 overs. The top performers were Iyer, 103, and KL Rahul who smashed 88 from 64 games and finished not out. They were supported by captain Kohli who made a solid 51 and Jadhav who had a quickfire 26 from 15 balls at the end of the innings. 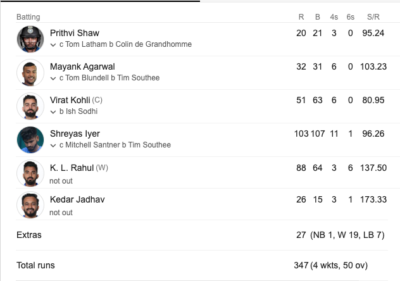 With the bat, New Zealand got off to a solid start putting on 85 before the fall of the first wicket. India looked to be in a strong position at 171/3 from 28.3 overs. Then Ross Taylor and Tom Latham put on a 140 run stand for the fourth wicket. Then the wickets started to fall and it looked like India could get back on top but Taylor stayed in and Santner came into knock 12 and seal the win with almost 2 overs to spare.

As mentioned India won the recent T20 5-0 but that does not, in our opinion, tell the whole story of the series. At 5-0 it looks like a thrashing but New Zealand performed well with bat and ball and made a good challenge in a few of the matches.

We saw back to back game won by India on a super over, something we cannot recall seeing in international T20 cricket before this. We also won one with 7 balls remaining and the final game by just 7 runs. This was a closer battle than the score shows.

The last one day series for India was against Australia in January where we won 2-1. This was a tougher than expected series with Australia taking the first match with an absolute thrashing of India. India laboured to a total of 255 all out only for Austalia to hit 258 without losing a wicket in just 37.4 overs. This seemed to spark the Indian team into action for the next two matches. 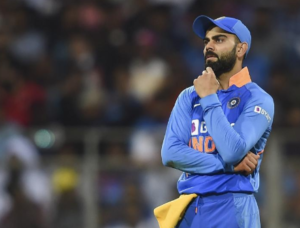 The next two matches saw India return to form in two excellent games of one day cricket.

In the second match Indi, Dhawan, KL Rahul & Virat Kohli built an excellent score of 340/6 from our 50 overs. Rahul came in lower down the order at number 5 and batted for almost 18 overs eventually losing his wicket on the penultimate ball of the innings.

Australia again batted well with Steve Smith getting 98 but no other players managed a half-century. Australia was looking good for a few overs when Smith and Labuschange (48) were in but the fall of Labuschange’s wicket proved to be a turning point. Their other players did well without really getting themselves in. The victory would have been more comprehensive had it not been for their number 10, Kane Richarson, smashing 24 from 11 balls in a valiant effort to chase the total.

Then came the series decider.

Australia went into bat first and posted a respectable, but not massive, score of 286/9. Shami was the lead bowler taking 4/63 from his 10 overs. He was well supported by Jadeja who took 2/44. It was the taking of wickets that kept the score down leaving Australia unable to build a big score despite Steve Smith hitting 131 from 132 balls.

It is difficult to read the one day form as they have not played since the cricket World Cup final back in July where they lost to a super over in one of the most dramatic games we have ever seen! In the World Cup, they were excellent and they showed that they could be more of a challenge to India here than the odds suggest.

The top order lead the betting as expected. Amongst the New Zealand batsman, this is a tough market to call for the first match.

Virat Kohli always leads the betting here due to his playing style and popularity. There is some value in the other players and this is one of the betting markets we regularly pick form in our cricket tips.

Latest odds for the first one-dayer

This is a great market and more of a challenge to pick from in a one day match. We will have a couple of players in this match in our 3 tips below.

Our cricket betting expert has three tips for this game

Lower odds than I would usually go for but I am expecting India to bounce back here as they did against Austalia. Whilst New Zealand still pose a threat to the lengthening of the odds after the first game has me interested.

This is a bet based purely on stats and value!

We are backing these as two singles for the same stake, if one of them hit a six we will, at worst, break even. If they both do we will be in a great profit. These two are in excellent form and despite switching to one day from T20 we’d still expect a couple to fly over the boundary!

This is an excellent bet set at a fair level when you consider Kohli is set at 47.5! The odds here are good and Rahul is a phenomenal batsman. We were really expecting higher odds here!