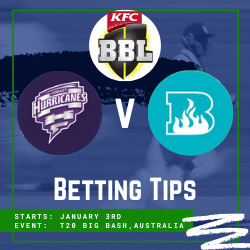 It’s now game 21 of 61 in the Big Bash League. We’ve enjoyed the action so far including a super over game. Our attention now turns to the Hobart Hurricanes v Brisbane Heat on the 3rd of January. Both teams have struggled so far with Brisbane Heat sitting second bottom and the Hurricanes sitting in 4th. They both come into this game on the back of a defeat to the Scorchers and the Melbourne stars respectively.

We will look at the odds and the form of both teams to make our betting predictions for this match. You can get straight to the Hurricanes v Heat tips here.

Despite being lower down the league table Brisbane Heat are actually the favourites for this game! They have just 1 win from 3 and a net run rate of -0.540. Apart from the one win against the high flying Sydney Sixers, they have been generally poor in the other game.

As you can see in 3 of the games they have struggled to break 150 runs when chasing. Their only win has come when they batted first and in some ways were under less pressure.

The Hobart Hurricanes have been less prolific with the bat but we’d say they have bowled well in their games. They have bowled out both the Sixers and the Renegades in their four games so far. The two defeats were both at the hands of the Melbourne Stars and one was via the D/L method due to rain limiting the game to just 11 overs each.

With the bat, they have also failed to get over 150 runs, like Brisbane Heat, but they have made up for it with the ball.

We would have both teams at 9/10 to win this match if we were pricing it up rather than any clear favourite.

To hit a six odds

Great to see a big market for this match and hopefully some real value on offer.

There are some great options to pick from here with a number of players over even money to hit one six. We will be having a couple of picks further down the page in our betting tips for this match.

You can see all our daily cricket betting tips here if you are looking for tips on other matches.

Man of the match odds*

Here are today’s players and their odds

This is a really tricky market to pick from with a range of players able to win this in any match. A strong batter or bowling performance can win you the man of the match. Look for players who are in good form and pick multiple players for the best chance to win.

*Odds subject to change, correct at the time of writing.

The price on the Hurricanes is too good to turn down. As mentioned above neither team is in great form but the Heat have only 1 win so far and have not looked great when we have watched them.

This is advised as a smaller stake bet than usual as both teams are poor and it is a tough game to call. If the Hurricanes bat first then we would be more confident of the win as Brisbane Heat has been poor chasers so far.

This is a market we can only seem to find on Betway.

Both teams are struggling to make runs and this line looks to be set at a high bar. We know there are quality players like Darcy Short or Chris Lynn capable of making these scores but the value here is on the unders. We were expecting the line to be around 57.5 in this market.

What value for Shorty here! In Big Bash history he’s knocked 60 sixes in just 39 innings. He hits a six in the Big Bash every 18 balls.