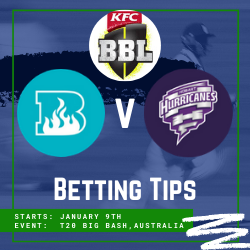 Thursday’s Big Bash game is between Brisbane Heat and Hobart Hurricanes. After Wednesday’s games, this has a lot to live up to match the excitement of two hat tricks in one day!

Both teams have six points from three games so far and sit on six points. Brisbane Heat is in 5th place courtesy of their higher net run rate +0.038, the Hurricanes have a -0.435 net run rate and sit 7th.

Brisbane Heat is the strong favourites for this game. They have performed better and this is shown in their higher net run rate. They also have home advantage in the match which all points towards a Heat win. This match also features in Betways 4 to score competition – Win money predicting 4 cricket matches.

Brisbane Heat looks to be too short to back and the Hurricanes too poor! This will be one game where we don’t have any pre-match tips on the match-winner! We will have a tip for after the toss though, see our tips here.

Despite their similar records, Brisbane Heat comes into the game in better form. They may have started the tournament poorly but the form of Chris Lynn with the bat has helped them to get three wins from their last four games. They will be looking to build on this against the Hurricanes. 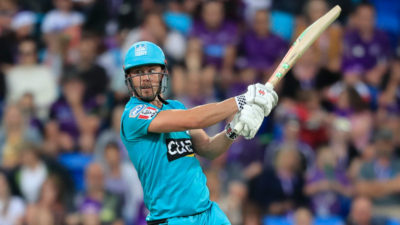 There’s also England’s Tom Banton who is in fine form too. He’s just got the second-fastest 50 in Big Bash history smashing 50 in 16 balls including 5 consecutive sixes. If he and Lynn get going then there could be no stopping them!

We were impressed with their win over the Sydney Sixers where they smashed 209/4 from their 20 overs. Lynn was in incredible form with the bat hitting 94 from just 35 balls. They then took early wickets and pegged the Sixers back. They finished on just 161/7 from their 20.

The bowling performance was split across the team with six different players taking wickets, only Mitchell Swepson took two.

Two games ago the Heat and Hurricanes played (3rd Jan). Again Brisbane heat and that man Chris Lynn were in great form. They smashed 212/3 from their 20. Lynn was again the player of the match hitting 88 not out from 55 balls.

The Hurricanes chased well but lost 9 wickets in their chase, scoring 181 runs in the 20 overs. While the top order did okay with the top five batsmen all getting over 23 runs each none of them made it past 28.

As mentioned we will not be having a tip on this match due to the odds but we will say we expect the Heat to win.

Back to Page menu.
To hit a six odds*

Some very short odds on offer here! No surprise after the recent performances of Lynn and Banton especially.

The 9/20 on Lynn is the shortest odds we’ve seen in this market on the Big Bash. We would have to say the odds look fair to us with the form he’s in, the same goes for Tom Banton. Players in such good form will have the bookmakers fearful so they drop the odds to the point it unbackable as there is no value to us, the punter.
Back to Page menu.

This market looks to have a lot more value in it than the to hit a six market!

We’re not sure about some of these players on the list and their odds. Although Banton was incredible in his recent 50 we’re not sure he’ll be able to reproduce such fireworks here. D’Arcy Short looks too low odds to us. He has 2 50s in 6 innings and whilst his average is an impressive 49.6 so far 9/4 does not represent good value to us in this match. We do have one pick from this market in our tips today.

If this follows the form you’d expect to see a Brisbane Heat win, so we have tried to find some value in our betting tips.

We need to wait for the bat flip before we place this bet! We have noticed a trend in the Brisbane Heat stats – They have only won when batting first. So far this tournament they have has to chase a total on three occasions and they have gone on to lose all three. They have batted first in three matches and they have won all three.

When batting first they average over 200 runs (allowing for one using the D/L method where they hit 119/4 from just 8 overs). When batting second they have failed to get past 145 in all three matches. They have been all out for 109, all out for 143 and 145/8. They are possibly the worst chasers in this year’s tournament so far. You can back this with 22bet and get a ₹10,000 new customer bonus below

This is a great price! Lynn has been devastating with the bat in the most recent games. He’s had two fifties so far and they have come in the last four games. He’s been the teams, top scorer, on three occasions so far and picked up the player of the match twice. If Brisbane Heat bat first then this will be even better valued.

Again we are waiting for the bat flip to back this.

We really like covering two bowlers in a team match as it offers god value covering both for a profit. Ahmed has 8 wickets in 6 so far and has an economy rate of 7.18. Bowland has only one game so far but looked good, taking 2/29.