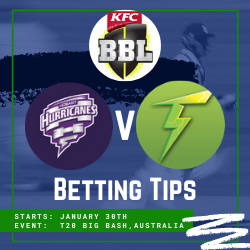 With the league format over the first playoff takes place on Thursday between the Hobart Hurricanes and the Sydney Thunder. This looks to be a great game between these two. They have met twice in the league format and have one win each. Their records were both similar with 6 wins from 14 matches and a very similar net run rate. We’ve got a full preview and three tips for the match!

The Hurricanes are the favourites here as the home team. They ended the league strongly with three wins in a row to finish 4th and get the home playoff.

As mentioned above, the Hurricanes finished the league stages in style with three wins in a row. This really propelled them up the league when they looked like missing out on the playoffs. Prior to this, they had a run of five games without a win, including one no result due to the rain.

In their last match, they were in top form with the bat. They knocked 217/1 off their 20 overs including a massive 130 not our from Matthew Wade – the second-highest score in Big Bash history! D’Arcy Short was also in fine form getting 72 before losing his wicket in the 18th over.

In the last game between the two the Hurricanes destroyed the Thunder to go above them in the league. Batting first they set the Thunder a decent 186 to win. Matthew Wade was again the form man with a knock of 56 from 34 balls, although his opening partner, D’Arcy Short was out for a duck this time. Mac Wright, batting third, stepped up and got 64 in a good overall batting performance.

Sydney Thunder started well with the 100 coming up quickly right before Alex Hales fell for the third wicket at 100/3. They still looked in a good position here if any of the remaining batsmen could get in and get some runs. However, they collapsed with the last 7 players coming in and getting seven runs between them eventually being all out for just 128. 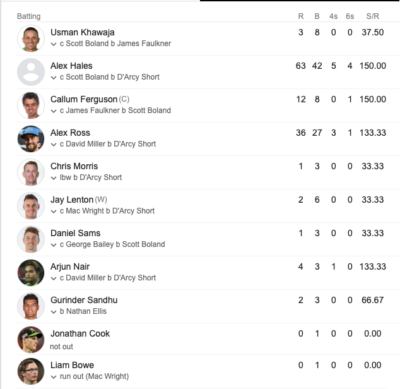 Sydney Thunder really scraped into the playoffs with a two-run win over the Perth Scorchers in what was almost another playoff. The winners knew they would make the playoffs so the pressure was really on. The game was affected by rain and was settled by the D/L method.

With the game limited to 15 overs, Sydney Thunder performed well with the ball keeping the wickets coming and limiting the Scorchers to 99. The wickets were split across the bowlers who all performed well. With the bat, Alex Hales was in good form as he has been most of the tournament.

Prior to that, the Thunder have been up and down with their form. Since winning their first two matches they have failed to get back to back wins in the next twelve games.

We were surprised to see Short as the favourite in this market as Wade is the form player, in our opinion.

It is no surprise to see Hales at such short odds given his form and the other two of the top three at relatively short odds too. The value is probably in a split bet of Hales or Ferguson to be the top Thunder batsman.

There are some good odds on offer here for some top in form players. Even Ward and Hales are not at short odds!

We have three tips for this match.

The recent form of the Hurricanes is too good to ignore at 4/6 odds. Added to that we have Sydney Thunder who have failed to win back to back games since the start of the tournament.

If the Hurricanes bat first the recent Big Bash stats show us that they should put on a 180+ score. We think this will be too much for the Sydney Thunder to chase.

Tip 2 – Betway BetYourWay  – Boland and Sams to take over 0.5 wickets

Betyourway is the same match bet builder that is on offer for selected cricket matches from Betway. These are two very capable bowlers and Sams is the top bowler in the Big Bash this year.* 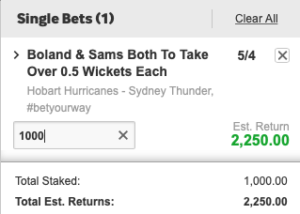 There’s some serious value on offer in this market for this match. We have top players in great form at some excellent odds. In other matches, we’ve seen odds much lower than this for top performers and are happy to take all three players here.