The 2019 Ashes series gets started on the 1st of August 2019 at Edgbaston. This is set to be an excellent 5 test series in England with Athe home team the slight favourites for the series with most bookmakers having them around 4/5 for the series with Australia around 13/8. Despite England’s recent win in the Cricket World Cup, their test form has not been great recently and this looks to be a very close series.

Betway is our top-rated betting site in India and has a wide range of markets on offer for the Ashes. We have selected our top 3 #Betyourway odds for the whole series –

Who will win the Ashes?

In our opinion, Australia will win the 5 test series and the urn this year.

We think they look the stronger team of the two and England look to have a World Cup hangover. If they play anything, as they did against Ireland in the warm-up test Australia, will destroy them!

In the current test rankings, England sits 4th with Australia 5th but it is currently very close. 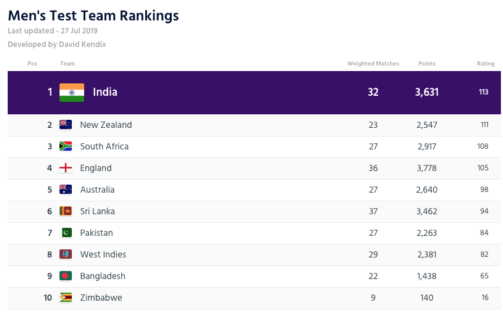 It’s no surprise to see India as the top team but there is not much to devise from this list for the ashes.

In the recent test series against the West Indies England performed poorly against a team 8th in the test rankings. In that test series, they lost 2-1 including a defeat by 10 wickets and a loss by 381 runs which is really poor!

In 3 of the innings they failed to get past 200 runs and in one they were out for a mear 77. In the last test where they won the numbers did improve where they got their one innings over 300 – the only one of the series to get past this point. Play like that against the Australians in the Ashes and they will get a thumping!

Over the last 12 months, England has shown glimpses of the form including a 4-1 win over mighty India on home soil. This is where the bookmakers are getting their pricing from along with a comfortable win over Sri Lanka in the away series in November.

When we look back to the last Ashes you will see why we are liking the odds on an Australian victory in this series. In 5 test just 18 months ago Australia ran out with a comfortable 4-0 win with 1 match a draw.

Based on the head to head record, it is difficult to see how England have improved so much in this space of time to make the odds on favourites for the series. We are happy to back the Aussies for the series at 13/8 with Betway India.